The Jewish Life and Culture collection depicts the 5,000-year history of the Jewish people, from the pre-Canaanite era through the settling of the Jewish communities of Tulsa and the American Southwest. 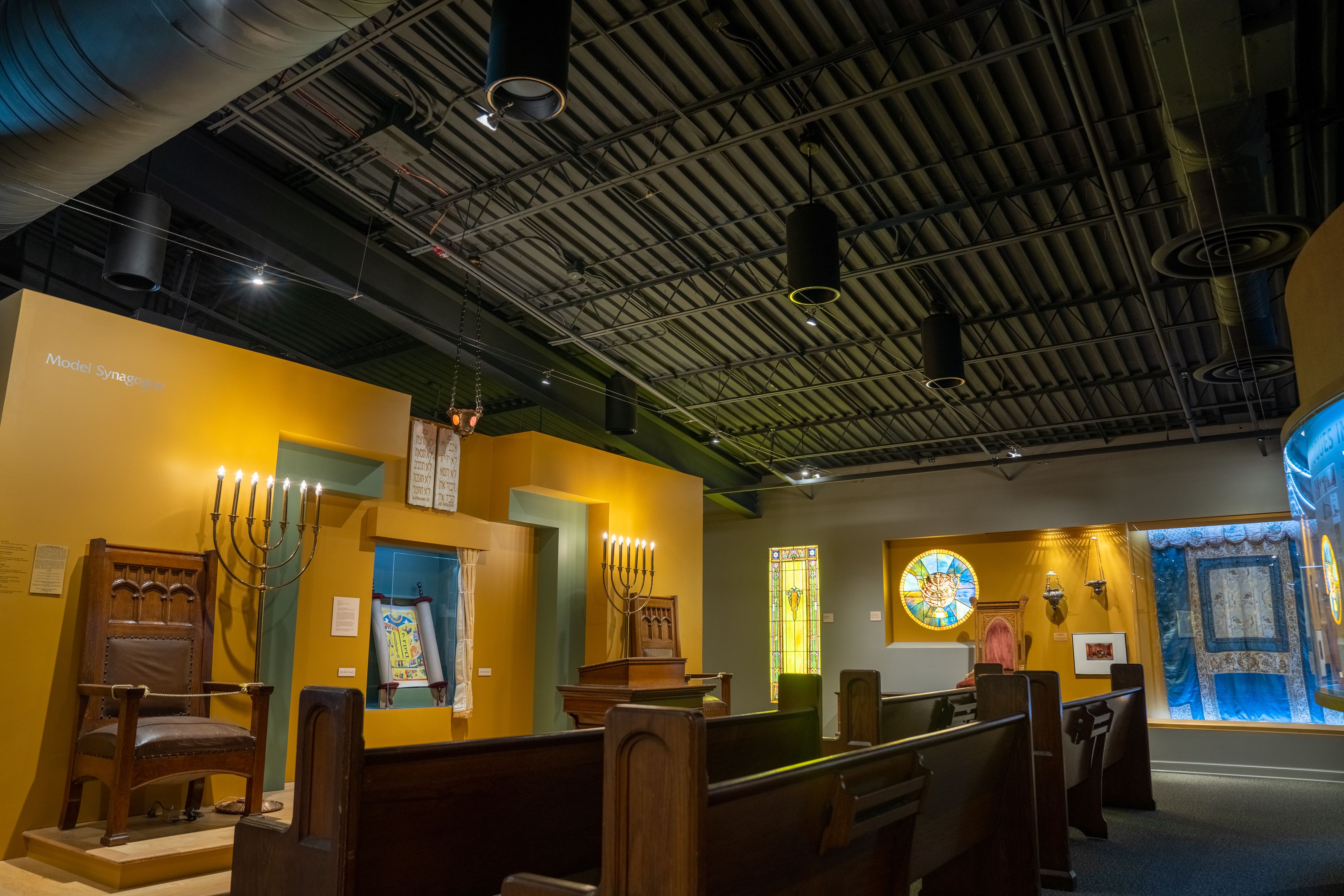 The collection features over 16,000 pieces, including items of archaeological and ritual significance, ethnographic costumes, synagogue textiles, historical documents, and fine art. The collection attracts visitors who wish to enhance their understanding of the Jewish people’s similarities, differences, thoughts, motivations, and expression of identity through time.

7 Quintessential Objects of Judaica and Their Ceremonial Significance:
The Menorah

One of the oldest and most recognizable Jewish ceremonial objects.

Known as a Marriage Contract.

For a prayer recited immediately before the meal on the eve of the Sabbath or a festival.

Candles that are lit on Friday evening before sunset to usher in the Sabbath.

So no one touches the Torah while reading it. 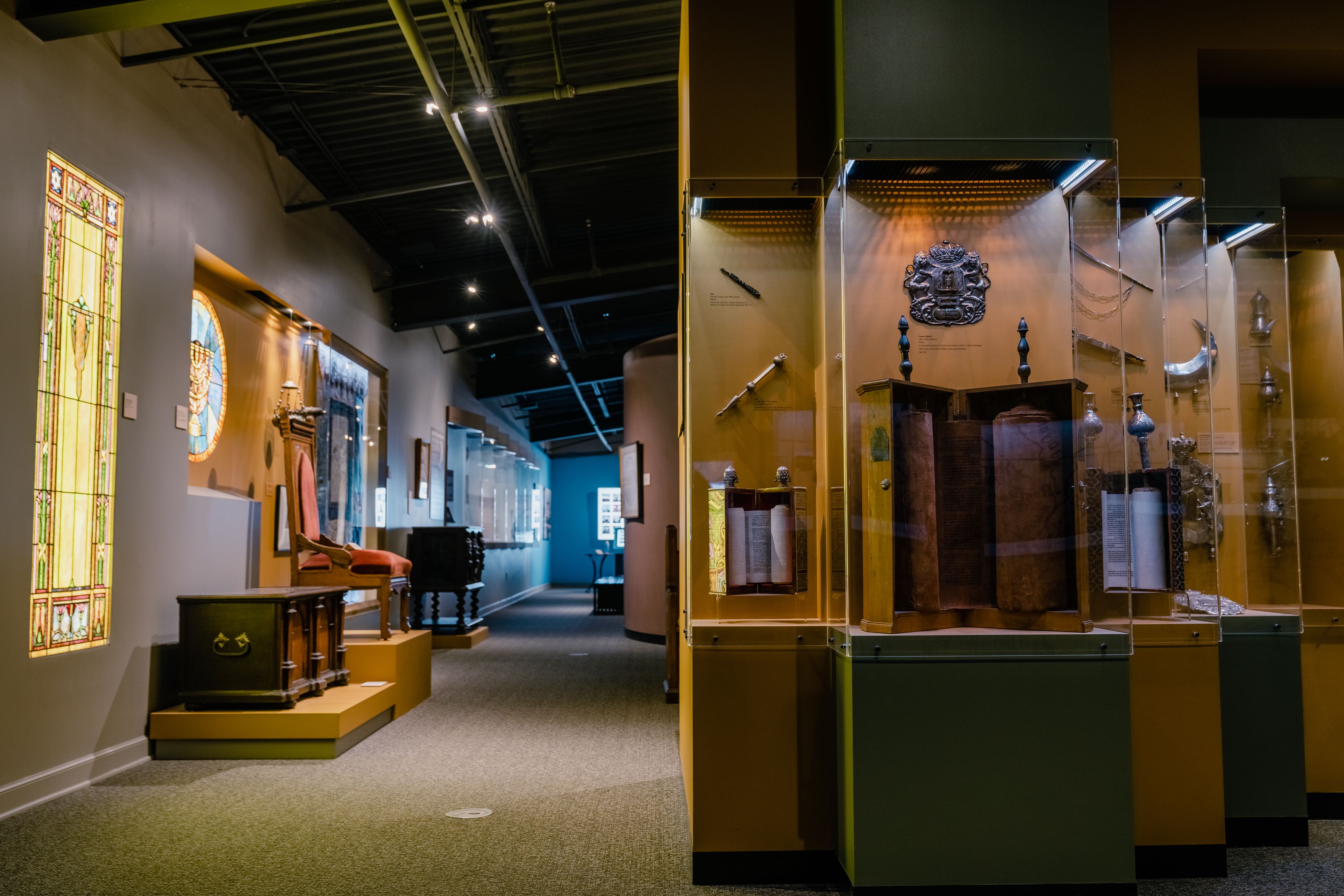 The practice of Judaism is concerned with the cycles of life. These cycles may be natural, ordained by custom or law, or reflect the needs of society, derived from the concept that the entire world and all that we do is granted by the Almighty and thus imbued with spirituality. All of these cycles are intertwined with customs ancient and modern — practices adopted from every corner of the world the Jew has wandered. 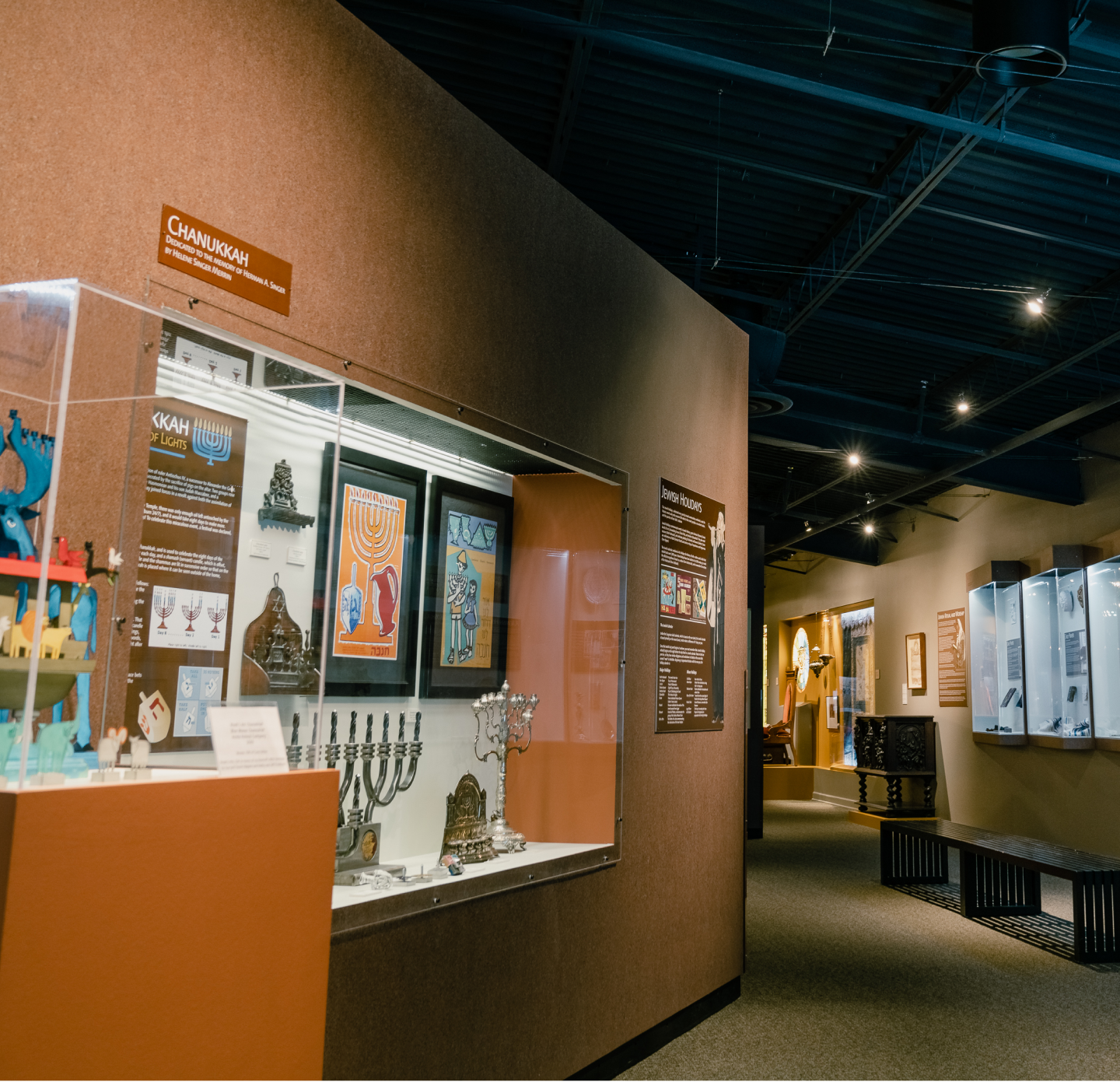 From the High Holy Days of Rosh Hashanah and Yom Kippur to the eight-day celebration of Hanukkah, a typical Jewish holiday list typically spans from March through December on a secular calendar. But because the Jewish calendar is different, holidays can be hard to keep track of from year to year as the dates in a secular calendar move around.

Jews may begin each phase of the day, month and year with a prayer of thanks. This act of prayer may extend to a range of activities dependent on a Jews' individual level of practice or custom. 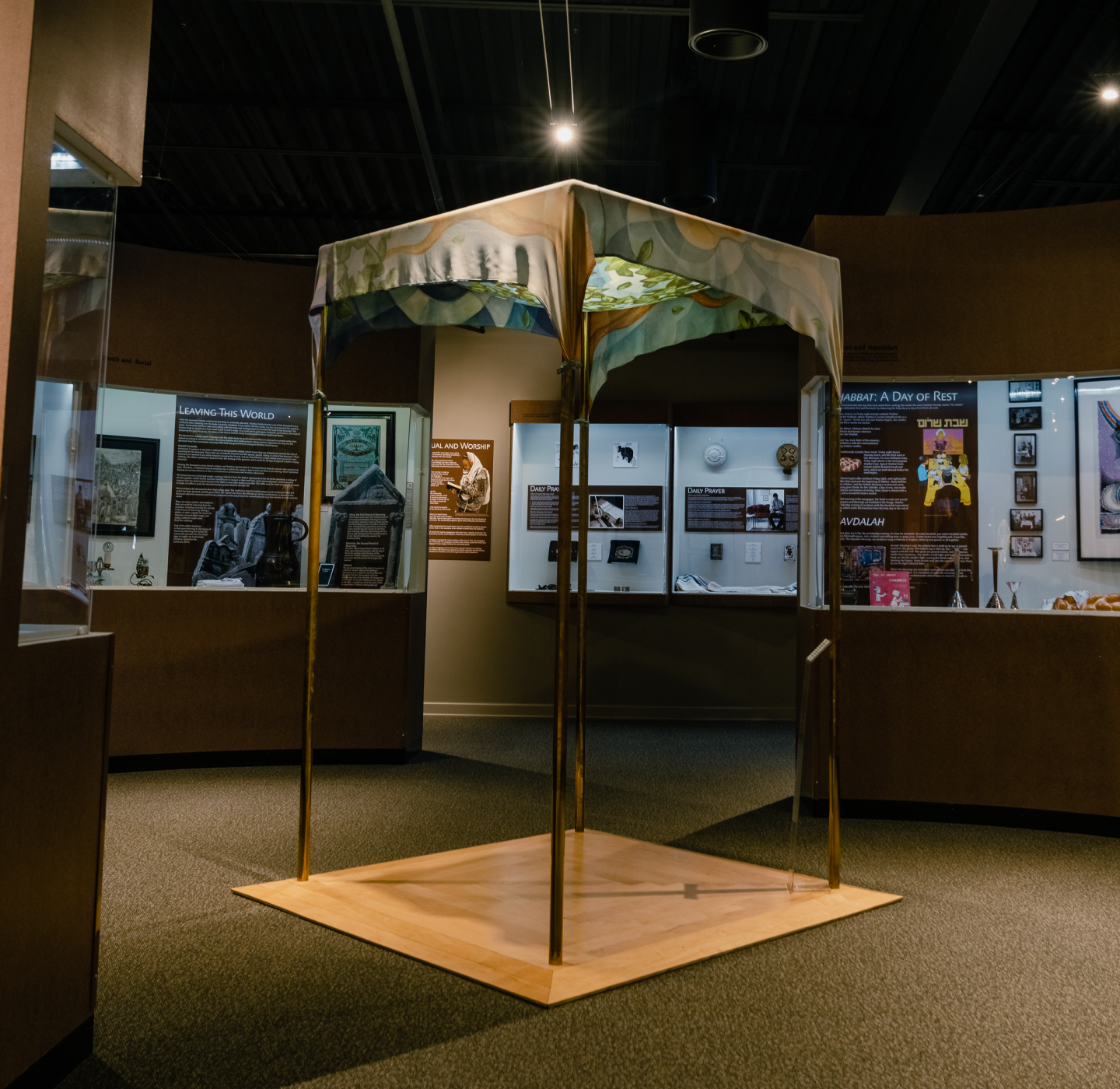 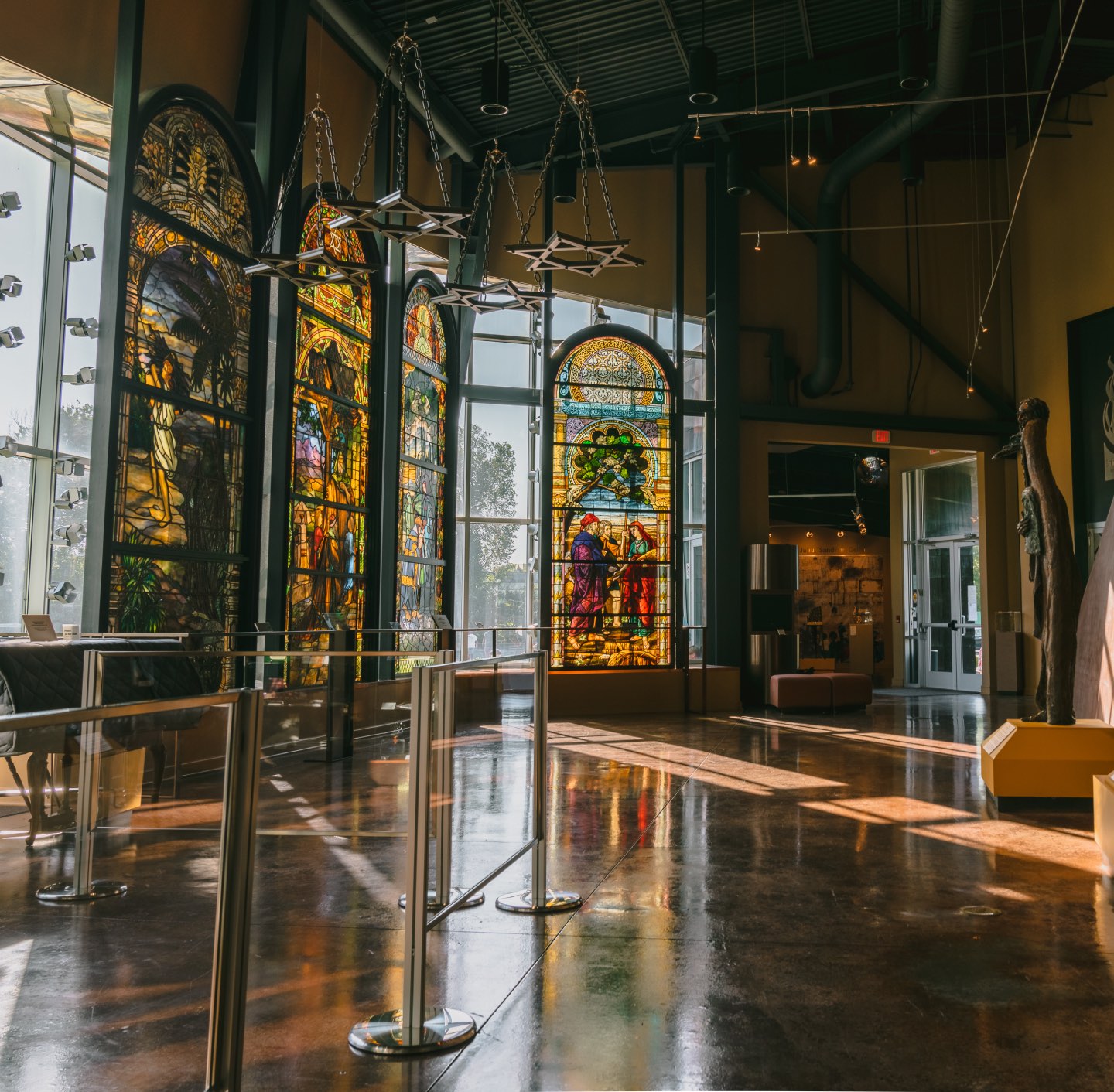 Jews have always expressed themselves in various art forms that reflected the vernacular culture of the time and place where they lived. While a passage in the Torah (Ex. 15:2) prescribes that beautiful implements be made to adorn the Torah, another rule located in various places (Ex. 20:4; Deut. 5:8) prohibits the making of any image or likeness of man or beast. It is presumed that this prohibition refers to objects made for use in worship. Undoubtedly, it also restricted the development of visual arts among the Jews.

Attitudes towards restrictions on visual arts have changedover the centuries. The interpretation of the Second Commandment often reflected political and nationalistic trends, such as the Jewish opposition to graven images during the Second Temple period, spurred by the resistance to Roman rule. In more recent times, portrait painting and photography have been tolerated even by the most orthodox.

The Sherwin Miller Museum Collection includes numerous examples of fine art with strong Jewish content alongside ceremonial pieces that are artful in their own right.

For over 45 years, The Sherwin Miller Museum of Jewish Art has preserved and exhibited a Torah rescued from Pribram, Czechoslovakia, and provided to the Museum by the Memorial Scrolls Trust.

In 1942, Jewish communities throughout Nazi-occupied Czechoslovakia sent their religious objects to Prague to protect them from being lost, destroyed or stolen by the Nazis. Through this effort 1,564 Torah scrolls were saved. After the war, the Torahs were left in storage, mostly abandoned until British philanthropists purchased the collection from the Czech government in 1964 and created the Czech Memorial Scrolls Trust. From London, scrolls have been loaned to communities and museums around the world.

A Torah scroll is hand written on parchment in Hebrew, and contains the five books of Moses: Genesis, Exodus, Leviticus, Numbers and Deuteronomy, which are also the first five books of the Christian Bible. 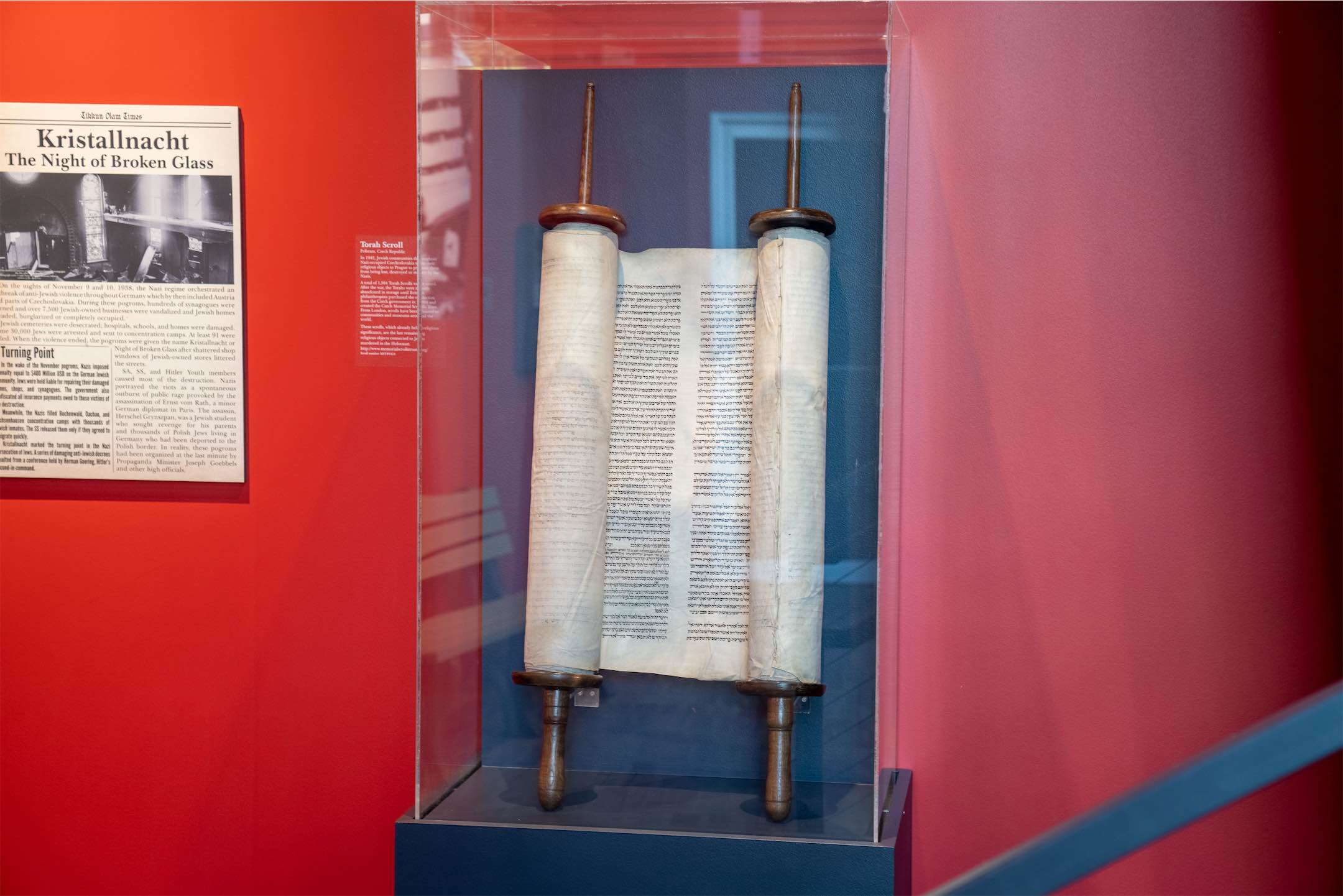